[Editor Charlie sez: The “virtual gift” is kind of old news and we’ve been covering it since 2018–but–it’s another market confirmation that streaming royalties are inadequate (nobody talked about virtual gifts with Tower Records or iTunes Music Store). It would be better if Spotify spent less time gorging themselves with their snouts in the public markets trough and more time figuring out how to pay performers a sustainable royalty.]

SoundCloud is preparing to introduce a new payment system that would allow fans to pay artists directly, multiple sources close to the situation tell Billboard, setting what could be a game-changing precedent for the streaming world.

The move would make SoundCloud the first major music streaming service to embrace a direct payment model, a strategy that has been popular with Chinese streaming services like Tencent Music’s QQ Music for years, and one that subscription services like Patreon and OnlyFans have built their businesses around, as musicians and fans around the world clamor for bigger digital music distributors to do the same.

The user-centric system means that if one user pays $9.99 a month for Spotify Premium but only listens to independent cellist Zoë Keating, that user’s $9.99 would be paid exclusively to Keating.

“These companies are taking power away from listeners, because listeners don’t have any say where their money goes,” Keating told Business Insider. “If you only listen to me, I should get all the percentage of the money you spend on music.”

Read the post on Business Insider (may require subscription)

For an artist to sustain a career, they need a variety of income sources and streaming is one of them. How do the services rank from the artist earnings perspective? I gave a year's worth of my data to @businessinsider https://t.co/yJ5vBz2deP

Unless you spent a lot of time listening to early ’00s techno-utopian babble, the Theory of the Long Tail probably means nothing to you. Yet if you live in the US or Europe and you run a digital music label, you’re living it – or the fallout from it – almost every day.

In 2004, Wired magazine editor Chris Anderson proposed The Long Tail, an economic theory blown up by futurist steroids. It theorized that with the introduction of the internet, blockbusters would matter less and everyone would sell “less of more.” The Long Tail prophesied “How Endless Choice Is Creating Unlimited Demand,” according to the subtitle of Anderson’s later book, which if true would turn the field of economics on its head.

For a practical example of what this all means, compare a brick-and-mortar record store like the old Tower Records vs. an online retailer like Traxsource. Your local Tower Records had to limit its inventory to take into account a finite shelf space. Their stock might have consisted of a couple hundred records. And each record didn’t get equal shelf space: your hippie boomer parents were going to buy more copies of Beatles records than all your Belgian techno records, so the store would stock and give more attention to the former. This “artificial” scarcity of physical products taking up physical space and depriving it from other products had bent consumer behavior out of shape for basically all of history.

[Deezer is getting out ahead of the growing backlash against streaming service royalties with a blog post on the company’s site entitled “Deezer wants artists to be paid fairly.”  Deezer  becomes the first platform to commit to implementing a User Centric system (can we please not start calling it “UCPS”).  I’ll be interested to see their proposal in action.  Deezer does seem to have grasped the core issue of User Centric, whether it’s based on the ethical pool concept or otherwise:  There is no reason for the vast numerical majority of artists to stay in a system that results in fans paying for music they don’t listen to and an ever declining payout for those who are in it.  In the cold light of dawn, the science is in and the artists are out.

Streaming “Catalog” is any release older than 18 months–I cannot tell you how insane that is, but that is a topic for another day.  When you consider that “catalog” makes up a substantial majority of streams, it compounds the need for user centric royalty distribution instead of the current crisis. 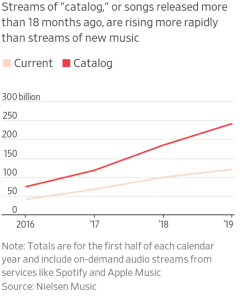 And if songwriters were given a chance to abandon their legacy revenue share structure that they will be stuck with for years to come in favor of a penny rate as Apple proposed in the CRB Phonorecords III, they’d probably do it, too.]

“We’re now a very important financier of the creation of music in France,” he said. “The streaming industry right now, through its paying system, generates more revenues towards specific genres loved by younger users, to the point that… important genres for people above 35 and 40 have their artists making less money than expected in the previous world, where each CD was sold, and the money was going artist by artist.

“We have started to take that mission to try and change the way the money is reallocated. It doesn’t have any impact on Deezer turnover in France, nor globally. But we believe it has an impact in the way we impact creativity, hence, the music we will bring to our users in the future.

“Just in France, UCPS is going to have the top streaming artists make, maybe, 10% less revenues. And on the other side, those who are making very weak revenues are going to be maybe making 30% more. We believe that this readjustment, which is tiny, can help a lot of artists who today are not getting any dime from the streaming business.”