It’s hard to believe that after a good ten years of being called out, YouTube still–still–cannot manage to stop neo-Nazi and white supremacist material from getting posted on its network.  We’ve been calling out YouTube for these inexcusable failures again and again and again.  And yet they keep recycling the safe harbor as an alibi–and they’re doing it again in Europe on Article 13.

I can understand that YouTube doesn’t want to “censor” users and there may be close cases from time to time.  For example, I could understand why YouTube CEO Susan Wojcicki might not want to take down videos from Seeking Arrangement that encourages young women into a “sugar daddy” relationship to pay for college and health care.

But you know what’s not a close case? It’s right there in the title of the song–“Who Likes a N—“.  You would think that one would get picked up in a simple text filter of debased language.  But it wasn’t ten years ago and it still isn’t.  Not a close case.

And then there’s “Stand Up and Be Counted” by the White Riders.  It’s not that hard to figure out by listening to any of the many versions of this song that it’s a recruiting song for the Klu Klux Klan.  And it’s not that YouTube doesn’t know it–this version of the hate song has clearly been filtered by YouTube–oh, sorry.  Not by YouTube, but by the “YouTube community.”  But why is it that a KKK recruiting song doesn’t violate YouTube’s terms of service if it doesn’t shock Susan Wojcicki’s conscience? 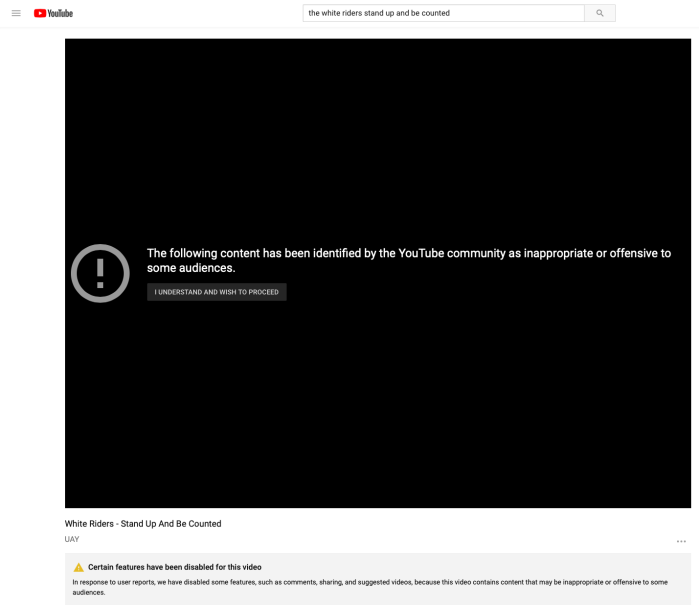 Today David Lowery called out YouTube and CD Baby for allowing hate rock to be distributed on their platforms.  Within hours, CD Baby pulled the account.  But not YouTube.

Let’s understand a couple things.  First, this is not hard.  The Anti Defamation League and the Southern Poverty Law Center have actual lists of these bands.  Both Music Tech Policy and The Trichordist have been hammering this issue for years.  Simple word searches could accomplish a large percentage of the task–the N word, KKK recruiting and images of Adolph Hitler are not close cases.

And let’s understand something else.  When users post movies, television shows and recorded music on YouTube, all of those materials have gone through some kind of legal review for standards and practices.  That doesn’t mean there’s no fair use or that there are no parodies.  It does mean that a human has thought about it because free expression is a judgement call.

Free expression is deserving of human examination.  You cannot create a machine that will do this for you.  You cannot rely on crowd sourcing to stop all uses of these vile terms and images–because in every crowd there’s someone who thinks it’s all just fine.  That’s why they’re called mobs.

YouTube, Facebook and all the Article 13 opponents actually are using a complete spectrum of review.  The problem is that they are cost shifting the human review onto artists and to a lesser extent their users for two reasons.  First and foremost is that they hope not to be caught.  That’s what the safe harbor is really all about.  The value gap is just a part of it–the other part is the values gap.  How do these people sleep at night?

But I firmly believe that the real reason that they shift the human cost onto those who can least afford it is because they’re too cheap to pay for it themselves.  They are willing to take the chance because getting caught so far has been a cost of doing business.

The real cost of their business is the corrosive effect that they have on our discourse, our families and our children.  There has to be a way to make YouTube responsible for their choices–and CD Baby showed today that it’s not only possible but necessary.

If YouTube and their paid cronies want to try to convince legislators that they deserve special protection, they need to live up to the standard that CD Baby set today.  And they need to do that before they get any further special treatment.

As we’ve said for years, the safe harbor is a privilege not an alibi.

[Editor Charlie sez:  Scott Cleland takes an excellent deep dive into the “leechonomics” of the safe harbors afforded to the special people who are members of the Internet Association and the Digital Media Association.  This corporate welfare was most recently replicated in the punitive Music Modernization Act retroactive safe harbor bolstering profits from copyright infringement for the special people which passed the House Judiciary Committee on the same day that the Congress cut back the CDA 230 safe harbor for the same special companies and cut their profits from sex trafficking.]

Nutshell Summary: Sweeping Government exemptions and immunities from risks and costs overwhelmingly favor zero-sum, parasitic policy arbitrage and corporate welfare, which perversely fosters unproductive “leechonomics.” U.S. Internet policy most incents platform business that maximizes arbitrage spreads, i.e. taking maximal societal risk that un-immunized competitors can’t take, where the benefits can be capitalized by platforms, and the costs socialized to the public (>$1.5T), because the government has only exempted and immunized platforms from normal accountability and responsibility for consumer welfare.