Hesse’s reward for sticking the shiv into songwriters was a partnership with big bucks at the DC Office of Sullivan & Cromwell, aka the gold plated revolving door waiting room where she proudly lists her expertise in “Intellectual Property”.  She left out “Destroying Lives of People Who Can’t Fight Back”.

And then of course there’s shiv meister David C. Kully, his bad self, now a partner at Holland & Knight who did Hesse’s dirty work and really did the day to day on fufilling Hesse’s inexplicable obsession with screwing songwriters to the wall.  Kully encouraged songwriters to leave ASCAP if they didn’t like the DOJ’s ruling on 100% licensing.

via The MTP Podcast: The Consequences of DOJ’s New Rule on 100% Licensing with David Lowery, Steve Winogradsky and Chris Castle — MUSIC • TECHNOLOGY • POLICY

Remember the ex-Googler Renata Hesse who managed to get both herself and the Department of Justice sued by SONA over Hesse’s grotesque mishandling of 100% licensing?  Like a good little bureaucrat, she leaves the songwriters to clean up her mess while she skips out to the big money.  Don’t let the revolving door hit you.

Sullivan & Cromwell LLP is hiring Renata Hesse, formerly head of the antitrust division at the Justice Department, as the law firm prepares for a continued wave of complex, cross-border mergers and other deals.

Ms. Hesse, 52 years old, will join Sullivan & Cromwell as a partner in Washington, D.C., the firm plans to announce Monday. The move is noteworthy not just because of Ms. Hesse’s stature in legal circles, but also because it is rare for Sullivan & Cromwell and other elite law firms to bring in partners from the outside. Until January, Ms. Hesse was acting assistant attorney general in charge of the antitrust division at the Justice Department, a position she has held twice.

Editor Charlie sez: Remember that the U.S. Department of Justice Antitrust Division came up with a very Googley fairy tale about 100% licensing?  Remember how the DOJ lost that case in the BMI Rate Court?

Now the U.S. government is appealing the case from the BMI Rate Court to the 2nd Circuit Court of Appeals to try to stick it to songwriters even harder. 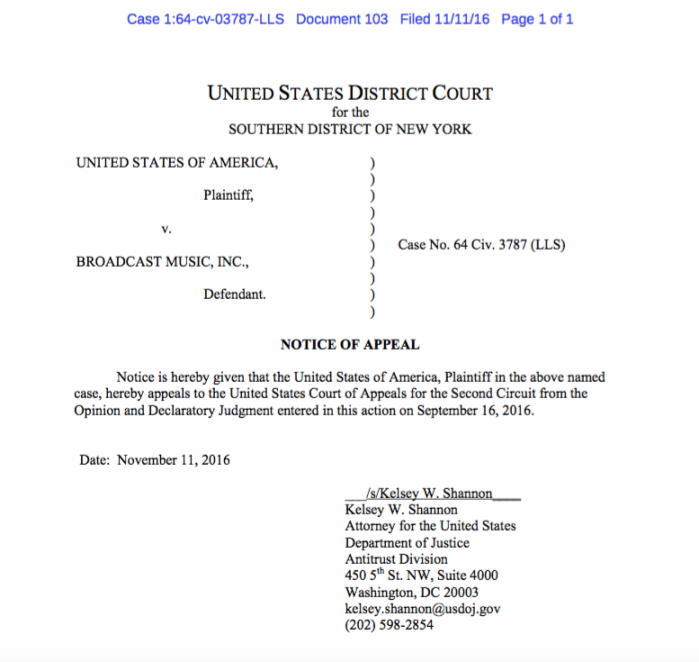 Obama like many political leaders has relied upon songwriters to shape his public persona and image.  But Obama has also allowed his antitrust division to relentlessly persecute songwriters in ways that benefit Silicon Valley firms that are among his largest campaign donors.

Politicians, especially democratic politicians have always appealed to songwriters and performers for help campaigning and in shaping their images.  But once the election is over we never see anything in return. Not even a “thank you.”  But our long running abusive relationship with politicians seems to have hit a new low. It appears the Obama DOJ purposely waited until after all those celebrity/songwriter/performer campaign rallies were finished before they renewed their “100% licensing” legal crusade against songwriter non-profits BMI and ASCAP.

And I do mean “purposely waited.”  Let me explain.

According to emails released under the US Freedom of Information Act, Google briefed the White House on an antitrust investigation into itself, breaking a 40-year precedent of the President’s office staying out of competition issues.

It’s no smoking gun – just another small but valuable piece of evidence showing how close the ties are between Obama’s White House and the giant ad-slinger.

It was unearthed by the Google Transparency Project (GTP), which has illustrated how close Google lobbyists and the government are, and how close Obama’s team was with the Federal Trade Commission (FTC) and the Federal Communications Commission (FCC), the USA’s competition watchdog and telecom industry regulator.

The Project notes that every president since Nixon has stayed well clear of antitrust probes. Both the FTC and FCC are statutory arms-length agencies that report to Congress, not the POTUS. However, the historical relationship began to change, as Google realized it was pushing an open door.

More recently, the Department of Justice antitrust attorney Renata Hesse proposed a change in copyright regulation that Google might have written itself. Although Hesse is now acting attorney general for antitrust issues, as well as keeping her brief over the entertainment industry, for six years she worked at the top Silicon Valley law firm Wilson Sonsini Goodrich and Rosati, on cases where the law posed challenges to Google’s business practices.

“I did a lot of work for Google on [antitrust],” she admitted in 2008. Hesse now wants to change the administration of copyright in such a way that many song owners can’t refuse Google license.”

(For details, see this timeline, and marvel.)

“Some of us believe we live in an era of government by Google,” music manager Irving Azoff told Rolling Stone. “Their power to influence Washington is unprecedented.”