[Editor Charlie sez:  How do you say “ponzi”? “A&R and Campaign Managers were only told to “launch launch launch” new campaigns so that payments could be distributed to other projects. They very well knew that they were unable to pay artists, but needed to launch new campaigns in order to gain more revenue. Employees knew that this was not ethical, but at the end of the day had no choice. “

What really happened at PledgeMusic?

Here’s an email from a former employee, received earlier this week.  Last week, PledgeMusic announced its intentions to declare bankruptcy, while offering no assurances that unpaid artist balances — potentially in the millions — would be repaid.

As a former employee at PledgeMusic, I have information that is useful for anyone who is interested in knowing more details about what happened to the company.

1. Dominic Pandiscia is the one to investigate….

[Editor Charlie sez:  You’ve all probably gotten mass emails full of glittering generalities about the Music Modernization Act.  Well…you’ve been Sneekyfy-ed! Chris thinks the prohibition on litigation may not apply to voluntary licenses that they get, only the compulsory license that you get…more to follow…breaking!]

The Music Modernization Act has been touted as a progressive step for royalties in the digital era.  Just be careful of the fine print around page 82… 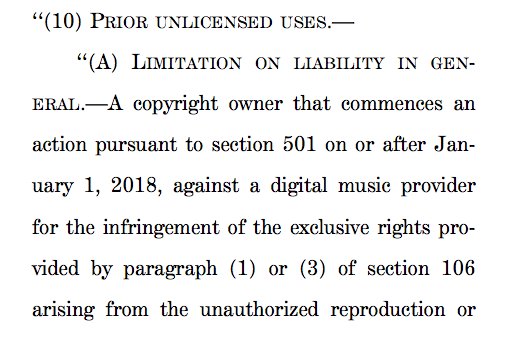 So there’s a brand-new piece of music legislation on Capitol Hill.  Called the ‘Music Modernization Act’ (H.R. 4706), the measure is designed to greatly modernize digital-era royalties and solve a gaggle of previous lawsuits.

Overall, the measure is being applauded as a way to increase royalty payments to rights owners in the future.  All while simplifying the licenses and transparency of payments.

Among other changes, the bill updates Section 115 of the U.S. Copyright Act to create a single licensing entity and a blanket licensing system for mechanical publishing licenses.  That entity would be funded by digital music services and overlooked by various publishers and songwriters.  Both sides seem to like this bill.

About time, right?  But here’s the catch: if passed, it effectively shuts down any potential legal claims on unpaid mechanical royalties from companies like Spotify.  That’s right: if the lawsuit wasn’t filed by January 1st, 2018 (i.e., the past), courts will throw out the suit.  And streaming companies (or any other music platform) get away with it.

Which is one reason why Spotify absolutely loves this bill.

Read the post by Paul Resnikoff on Digital Music News