It’s just a casual poll on Twitter, but an interesting result!

While we are not surprised to see Facebook the massive infringer and destroyer of worlds at 0% as least trustworthy, Google got a much higher score than we anticipated.

But the real headline was just how badly Spotify got beat by Apple, its main lawfare target. Mind you, the Trichordist audience is heavily weighted toward artists and songwriters, so it’s not surprising.

Music Business Worldwide reports in a fairly detailed article that Apple is launching a music publishing division–crucially based in both London and the US run by Elena Segal (recently of my old alma mater, Mitchell Silberberg). This doesn’t necessarily mean that Apple will be competing with publishers to acquire catalogs or for songwriter talent–but it could get interesting.

[And Apple leads Spotify in another metric, too.  Apple has not filed a single “address unknown” mass NOI–not one.  Spotify has filed millions.]

[An internal Apple] memo, obtained by Variety, [contained] the latest subscription milestone achieved by the three-year-old service. Apple Music now counts more than 40 million paid subscribers in 115 countries. With some 8 million auditioning the service via free trials, the service is gaining ground on its competitors — namely Spotify, which went public on April 3 — at a monthly growth rate of 5% (versus Spotify’s 2%), per a recent report in WSJ.

Meet the new boss, worse than the old boss.  Looks like Spotify uses its dominant market power to destroy careers, but you can forget the anti-artist Obama Justice Department doing anything about it as long as Clintonista Jonathan Prince is at Spotify.

An escalating battle between Apple Inc. and Spotify Ltd. is leaving some musicians caught in the crossfire.

Spotify has been retaliating against musicians who introduce new material exclusively on rival Apple Music by making their songs harder to find, according to people familiar with the strategy. Artists who have given Apple exclusive access to new music have been told they won’t be able to get their tracks on featured playlists once the songs become available on Spotify, said the people, who declined to be identified discussing the steps. Those artists have also found their songs buried in the search rankings of Spotify, the world’s largest music-streaming service, the people said. Spotify said it doesn’t alter search rankings.

Spotify has been using such practices for about a year, one of the people said, though others said the efforts have escalated over the past few months. Artists who have given exclusives to Tidal, the streaming service run by Jay Z, have also been retaliated against, the person said, declining to identify specific musicians. 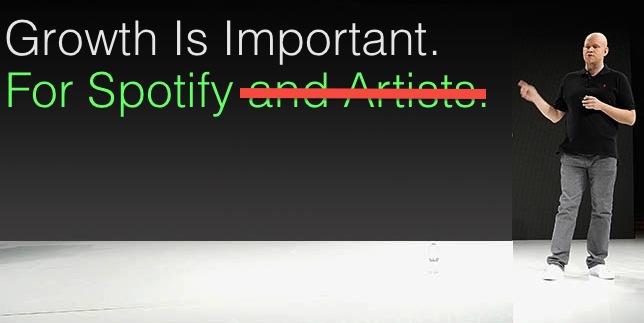 The music executive stole the show at its annual developer conference on Monday.

If you watched the livestream of Apple’s annual developer conference on Monday, you would have seen there was one Apple executive who out shined her fellow colleagues while presenting on stage: Bozoma Saint John.

One of the few female executives on stage, Saint John is Apple’s head of global consumer marketing for Apple Music. She shared news about Apple’s streaming music service, which has accumulated 15 million users, according to the company.

It’s no surprise that Apple appointed Saint John as the head of marketing around one of its highest profile services, Music, as she has built an impressive career around connecting musicians and artists with brands.