The first time I met with the French Minister of Culture, we met at their offices at the historic Palais-Royal complex which is also home to the Comédie-Française, the oldest active theater group in the world (founded in 1630).  The French take their culture very seriously.  One would do well to remember that in your dealings with them.

But of course, Google doesn’t give a rip about France, culture, French culture or the French Minister of Culture.  And as predicted, Google are refusing to comply with the new European Copyright Directive as transposed into French law.  (Once passed by the European Parliament, the Directive must be implemented at the nation state level–Google has no time for the nation state, either.  The law goes into effect in France on October 24.)

Having suffered a spectacular loss in the European Parliament, the American multinational Internet company is now going to bring Silicon Valley justice to France.

Google said Wednesday it will not pay European media outlets for using their articles, pictures and videos in its searches in France, in a move that will undercut a new EU copyright law.

The tech giant said it would only display content in its search engine results and on Google News from media groups who had given their permission for it to be used for free.

The announcement, which will result in free content gaining higher visibility, comes after France became the first EU country to adopt the bloc’s wide-ranging copyright reform in July….Google had warned after the European Parliament vote that the change would “lead to legal uncertainty and will hurt Europe’s creative and digital economies.”

Of course what Google meant was that Google will do everything Google can to hurt Europe’s digital and creative communities because they’re pissed.  Make no mistake, it’s not Google’s compliance with the law that is producing harm in France, it is Google’s refusal to comply that does so.

“A company, even a very large company, cannot get away with it when it decides to operate in France,” the French president insisted, during a visit to mark the centenary of the La Montagne newspaper in the city of Clermont-Ferrand in central France.

“We are going to start implementing the law,” he said.

According to Emmanuel Legrand’s excellent newsletter, Google is refusing to pay French news publishers for free-riding on their expensive news when delivered in Google’s massive monopoly on news aka search results:

French minister of culture Franck Riester was particularly incensed by Google’s decision. “I met with the head of Google News [Richard Gingras] this morning at the Ministry of Culture,” said Riester to journalists on the day Google made its decision public. “I sent him a very strong message about the need to build win-win partnerships with publishers and news agencies and journalists. The answer he gave me a few minutes later was stonewalling. This is unacceptable.”

Apparently this philistine from Silicon Valley not only has no respect for the law or the democratic process, he also has no respect for French culture.  Be clear on this–the French law was passed in the European Parliament over Google’s unprecedented astroturf lobbying campaign AND it was passed at the national parliament IN FRANCE.  The people were heard TWICE.

And if Mr. Gingras wasn’t insulting enough to Europeans and the French people from his cozy option-packed Silicon Valley enclave, he sure doesn’t know how to handle himself with the French minister of culture.  Here’s a hot tip–the Peter Pan thing is not a good look outside the Googleplex paedocracy.

But understand this–as I predicted, Google has no intention of complying with the Copyright Directive and will dump as much money as it takes in legal fees, PR campaigns, fake news and astroturf until it has exhausted all possible claims, trials, appeals, lobbying, the works.  Why?

Because THEY LOST AND THEY ARE PISSED.  What you are about to see play out is what happens when the richest and most powerful media company in commercial history strikes back.  What happens when the Silicon Valley company with control over the world’s newspapers says a people should know when they’re conquered.  No blow is too low.  And I keep saying, there’s only one thing they understand which is not fines.  You can’t get fines big enough to hurt them.

What gets their attention is anything that affects their behavior–and that means injunctions or prison.  They have no appreciation for anything we do to create music, movies, news, photographs, illustrations or any other work of authorship.  For them, it’s there for the taking.

Carr’s Google Enigma made a familiar business strategy point: companies that provide one component of a system love to commoditize the other components, the complements to their own products, because that leaves more of the value of the total stack available for the commoditizer….Carr noted that Google is unusual because of the large number of products and services that can be complements to the search function, including basic production of content and its distribution, along with anything else that can be used to gather eyeballs for advertising. Google’s incentives to reduce the costs of complements so as to harvest more eyeballs to view advertising are immense….This point is indeed true, and so is an additional point. In most circumstances, the commoditizer’s goal is restrained by knowledge that enough money must be left in the system to support the creation of the complements….

Google is in a different position. Its major complements already exist, and it need not worry in the short term about continuing the flow. For content, we have decades of music and movies that can be digitized and then distributed, with advertising attached. A wealth of other works await digitizing – [news,] books, maps, visual arts, and so on. If these run out, Google and other Internet companies have hit on the concept of user-generated content and social networks, in which the users are sold to each other, with yet more advertising attached.

So, on the whole, Google can continue to do well even if leaves providers of is complements gasping like fish on a beach.

What you’re seeing in France is the onset of gasping.

Copyright reform to boost the digital music market – what’s next?

Few could have missed hearing about the copyright debate in Europe. Amid cries of “upload filters”, “censorship machine”, “robocopyright” and other buzzwords, the move to bring copyright up to date came under heavy fire. The battle raged for nearly three years. The final directive was published in May. It’s an impressive result for the music sector in particular.

The legislation marks a turning point for copyright rules in Europe and beyond. All eyes are now on EU member states as they start implementing the directive into their national laws. Of course, this will bring its own share of challenges. We know the lengths some parties will go to try and hold on to the status quo.

So what was all the fuss about? It started when the EU decided it was time to clarify what the courts had already been saying about platforms. They provide access to music and other copyright material uploaded by citizens, so they need a licence and can’t rely on safe harbour legislation.

As you can imagine, this wasn’t music to everyone’s ears.

Poland has the distinction of being the first country to tip Google’s lawfare strategy against the Copyright Directive–sue to have the whole thing overturned by Court of Justice of the European Union, the “CJEU.”  The CJEU has, among other things, the jurisdiction to  hear an “action for annulment” filed by a EU government like NATO member Poland.

So who is in Google’s Polish footprint?  According to the Google Transparency Project, we find a few revolving door people.  Want to bet one of them knows how Poland came to file their case so soon? 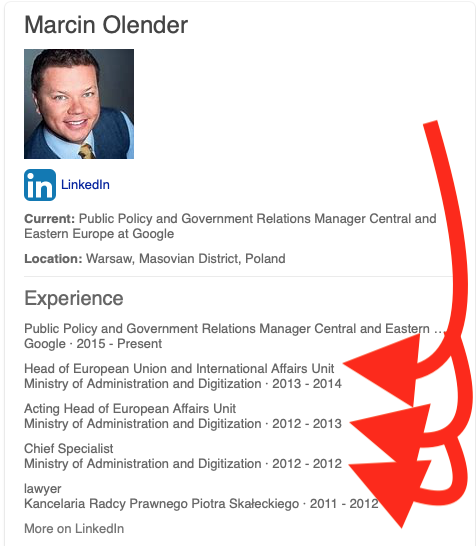 Big Door Keeps on Turning: Recent Departure from Google to (where else) Uber: Agata Waclawik-Wejman

But it’s not just the old revolving door.  Google has made a substantial investment in Europe, but in particular at the University of Warsaw. 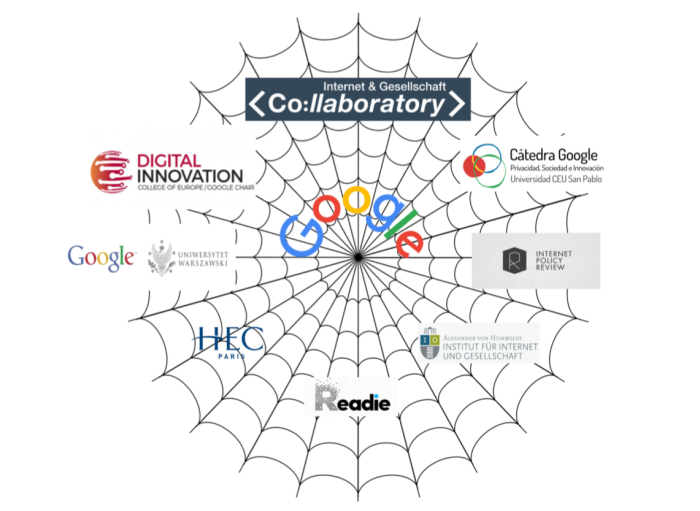 The Google Transparency Project describes Google’s investment in the University of Warsaw:

In early 2014, according to domain registration records, Google expanded its academic relationships in Europe further East, creating the Digital Economy Lab (DELab) at the University of Warsaw.

The program is described as an interdisciplinary institute funded by Google for the implementation of programs concerning the social, economic and cultural consequences of technology.

There is little public information about the extent of the partnership, or the amount of Google’s funding. However, the DELab website does offer some clues.

DELab’s director, Katarzyna Śledziewska, has a distinguished career in European policy and academic circles.  She also serves as a member of another Google-funded initiative, the Readie-Europe Research Alliance for a Digital Economy….

Stay tuned, this case may turn out to be an excellent vehicle to find out more about the extent of Google’s investments.

With right-wing populists expected to make big gains overall in the European elections, further legislation to rein in Silicon Valley could struggle to pass. In recent months, EU leaders have discussed imposing new digital taxes on the revenues of Big Tech companies; those efforts might not find support among Europe’s new parliamentarians. And the EU’s incipient antitrust crackdown against Big Tech—which now involves probes of Amazon and Google—could face stumbling blocks. Could Big Tech find itself depending on the votes of far-right, populist politicians to defend its corner?

[Editor Charlie sez:  Let the FUD farming begin!  Google fires up the addiction tactics in Europe after its miserable anti-artist message was rejected by the European Parliament.  Read this article if you want to know what Google’s talking points will be in Europe.]

[Now here’s some objective journalism:  “EU member states still have two years to write the vague language of the directive into law, and YouTube is not done pushing back on it.”]

YouTube and other tech platforms have argued that the only practical way to avoid liability will be to install even more restrictive content filters than the ones they currently have to prevent infringement. The EU directive does not require tech companies to do that and it makes exceptions for using copyrighted material in parody or commentary, as would be the case in Jones and Bardsley’s reviews.

But experts say it will be difficult for platforms to create automated filters that can distinguish this context, at least at first. That could mean a channel like “NitPix” would have to avoid using any movie or TV clips in their reviews to ensure their videos upload to the site in a timely manner.