“[Government] interference is but the first link of a long chain of repetitions, every subsequent interference being naturally produced by the effects of the preceding.”

James Madison, The Federalist Papers No. 44

There is a bill in Congress backed by the mega lobbying juggernaut called the MIC Coalition that would force songwriters and artists to “register” with the government in order to protect their rights from the biggest corporations in the world.  Failing to do so would take away the stick of statutory damages and an award of attorneys fees to songwriters or artists who are victorious in copyright infringement litigation.  Statutory damages and attorneys’ fees are the only real protection that the government gives these creators–the smallest of small businesses.

Why?  Because the government does virtually nothing to protect the rights of artists.  If it weren’t for statutory damages and attorneys’ fees there would be nothing between a creator and the ravages of mega-corporations.  Try calling a U.S. Attorney and asking them to prosecute a massive infringer.  If it hasn’t happened yet given the rampant piracy we’ve seen over the last 20 years now, it should tell you that it’s never going to happen with rich corporations that run roughshod over artist rights.

Yet songwriters in particular are some of the most highly regulated workers in America.  The government forces songwriters to license their work and sets the price they can license at–yet does nothing to enforce the “compulsory licenses” it imposes on songwriters.  Not only is the government in their lives at every turn, songwriters are poorly treated by their government.  Why?  One reason is that songwriters are among the smallest of small businesses and have little political clout.

That explains why the government imposes wage and price controls on songwriters through consent decrees and rate courts, but forgets to raise their wages for 70 years.  Can you imagine how that would go down if the government tried doing the same to auto workers or even the minimum wage?

The Rate that Time Forgot

What happens if a music user wants to avail themselves of the statutory license but simply refuses to pay the paltry royalty rate?  Nothing happens.  At least not unless the songwriter or their publisher sues for statutory damages and attorneys’ fees.  If you’ve followed the class action cases brought by David Lowery and Melissa Ferrick against Spotify, you’ll know that these cases only involve small songwriters.  Now there’s two publishers suing in Nashville–again, small publishers.

If these plaintiffs didn’t have the statutory damages and attorneys’ fees, do you think anyone in the government would care that the government’s compulsory license was being misused?

We’re From Washington and We’re Here to Help

Individual music users like Amazon, Google, Facebook and Spotify have about as much political clout as any notorious monopolists in history from Standard Oil to United Fruit.  As an organized lobbying group, these companies have the political clout of Big Tobacco, Big Pharma or Big Bombs. 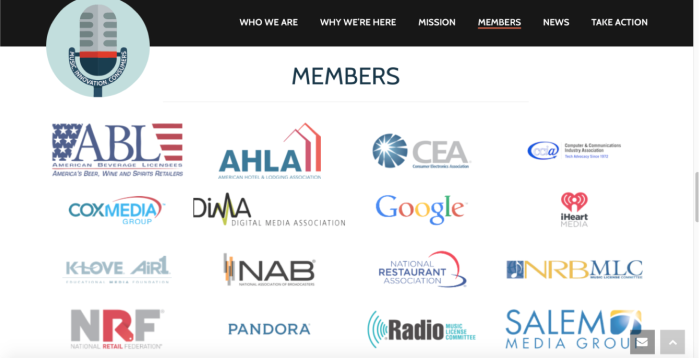 Here’s the pitch on the government database from the MIC Coalition:

The lack of an authoritative public database creates problems for venues and small businesses including restaurants, taverns, wineries, and hotels. For example, venues are declining to host live musicians rather than risk potential liability due to lack of up-to-date and actionable licensing information. The lack of a database is also a challenge for local broadcasters and digital music streaming services that rely on accurate copyright information to provide music to millions of consumers.

The assumption behind this legislation is that if the government just forced songwriters and artists to register in the government’s list, that music users would actually use that database.  If there’s one common theme in the recent lawsuits against digital services it is that the services don’t seem to use the available data–except to file millions of mass statutory licenses using a loophole in the Copyright Act claiming the users can’t find the copyright owner of the songs they use in the current Copyright Office records and seeking the government’s cover from lawsuits as if they were legitimate users.

If they put the same effort into finding the songwriters that they do into filing millions of mass NOIs, these services might not have so many problems.  And instead of removing the loophole, the government now floats this “government list” database idea to create an even more complicated loophole at taxpayer expense.

Reject the 11th Century Solution to a 21st Century Problem

It’s important to realize two key causes for the licensing mess the government has created through over-regulating songwriters, one of which is not entirely the government’s fault.

The Government Should Allow Statutory Licensing by ASCAP and BMI:  Because the government imposes a near-compulsory license through consent decrees against songwriters who are members of the two largest performing rights societies (ASCAP and BMI), a perfect opportunity to streamline the compulsory license is simply lost.  ASCAP and BMI are prohibited from engaging in compulsory licensing.  If these PROs were allowed to issue licenses for all the rights digital services need, that would be a meaningful step forward.

This would make ASCAP and BMI similar to SESAC which can issue both performance rights licenses and mechanical licenses after SESAC’s acquisition of the Harry Fox Agency.  SESAC is not subject to a consent decree.  The MIC Coalition didn’t like that either and complained to the Department of Justice seeking an investigation into stopping an idea that could work.

Require Music Users to Search the PRO Databases for Song Ownership before Serving Address Unknown Mass NOIs at Taxpayer Expense:  There is nothing in the “government list” bill that actually requires music users to search or document that they have searched this new database.  Current law requires a search of at least the Copyright Office records (which Amazon, Google, Pandora, Spotify, Microsoft, iHeart and others are supposedly doing already by the millions) and in some circumstances permits a search of the performing rights society databases as well (see 37 CFR Sec. 201.10 h/t Richard Perna).

It is a short leap to require music users to search the publicly available databases of ASCAP and BMI as well as the public records of the Copyright Office before serving millions of address unknown NOIs on the Copyright Office.  This will be particularly relevant given the recently announced voluntary cooperative effort between ASCAP and BMI to combine their repertory databases (which could include other PROs).  While there is some complaining from MIC Coalition members that ASCAP and BMI won’t indemnify users of their databases for the accuracy of the data.

That simply isn’t true for parties to the ASCAP and BMI licenses, which after all is why the databases are created in the first place.  Since ASCAP and BMI have no idea what use anyone may make of the data and if that use is even authorized by the song or recording owners, how could they possibly be expected to indemnify all users for any use in any country of any song?  Those databases are not a search engine.  Nobody else does that, especially not search engines, e.g., Google’s disclaimer:

Our Warranties and Disclaimers

We provide our Services using a commercially reasonable level of skill and care and we hope that you will enjoy using them. But there are certain things that we don’t promise about our Services.

OTHER THAN AS EXPRESSLY SET OUT IN THESE TERMS OR ADDITIONAL TERMS, NEITHER GOOGLE NOR ITS SUPPLIERS OR DISTRIBUTORS MAKE ANY SPECIFIC PROMISES ABOUT THE SERVICES. FOR EXAMPLE, WE DON’T MAKE ANY COMMITMENTS ABOUT THE CONTENT WITHIN THE SERVICES, THE SPECIFIC FUNCTIONS OF THE SERVICES, OR THEIR RELIABILITY, AVAILABILITY, OR ABILITY TO MEET YOUR NEEDS. WE PROVIDE THE SERVICES “AS IS”.

SOME JURISDICTIONS PROVIDE FOR CERTAIN WARRANTIES, LIKE THE IMPLIED WARRANTY OF MERCHANTABILITY, FITNESS FOR A PARTICULAR PURPOSE AND NON-INFRINGEMENT. TO THE EXTENT PERMITTED BY LAW, WE EXCLUDE ALL WARRANTIES.

If the government wants to tinker with the Rube Goldberg system of music licensing that it has imposed on songwriters, it could start by making these two changes before imposing a 21st Century version of William the Conqueror’s Domesday Book, the Great Survey of England conducted in 1088.

Oh, and if they’re so fired up about forcing people to do things through regulation, why not force music users to license, pay and account in compliance with the law.