Gary Shapiro, the long-time head of the Consumer Electronics Association (now called the Consumer Technology Association), posted a comment to an Artist Rights Watch post about Maria Pallante’s sacking at the Copyright Office.  [UPDATE from Charlie: By popular demand, we have posted Mr. Shapiro’s comment as its own post.]  The consensus of the editors here is that we’re both flattered and concerned that Mr. Shapiro is posting comments on ARW on a Sunday night. That effort deserves to be taken seriously and replied to.

First of all–it should be noted that Mr. Shapiro’s post falls into that category of public statements that I’d call a “non-denial denial”.

It’s also important to note that Mr. Shapiro’s comment is all about Washington, lobbyists, who did what to whom, settling old scores among the coastal elites, who owns who, who paid off who to do what, and so on.  The funniest line in his post was that Google isn’t a bully.  Now that is hysterical for those who have dealt with YouTube or tried to get anything from a jihadi recruitment video to “Banging Up for Dummies” taken down from any Google property.  Almost as funny as blaming the Sony hack on North Korea.

I fear that it is necessary to point out to Mr. Shapiro that this blog is Artist Rights Watch, not Lobbyist Rights Watch, or Let’s Watch the Lobbyists.  This may come as a shock to someone like Mr. Shapiro who’s been at this for so long, but it is very, very likely that anyone who reads this blog neither has any idea who he is nor cares very much.

If our readers know of the Consumer Electronics Association, it’s likely that they know the organization from its membership in the MIC Coalition. 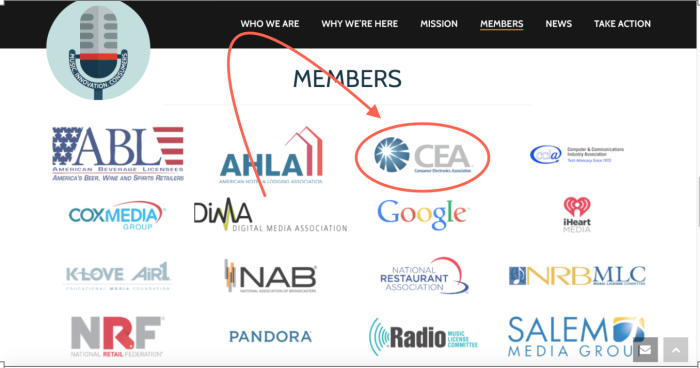 The MIC Coalition is, of course, the multi-trillion dollar lobbyists who are trying to screw what’s left of the songwriting community and stop artists from being paid fairly for radio airplay.

Or they might know the Consumer Electronics Association from its funding of the group Fight for the Future, which conducted a rather shadowy campaign against the Copyright Office, including making statements at odds with the facts in fundraising emails.

That statement in the box?  It never happened.

Here’s an excerpt from Schedule B of the 2014 tax return for Center for Rights in Action which is parent to Fight for the Future:

And then there was the classic line from David Lowery addressed to Michael Petricone (Mr. Shapiro’s right hand at CEA) when both were on a panel at the Future of Music Coalition Summit Poobahery in Washington regarding CEA’s support of the ill-fated Internet Radio Fairness Act:  “Stop making shit up, man!”

Those are probably the ways that the vast majority of people who read this blog would know of the Consumer Electronics Association.

It would be well for Mr. Shapiro to observe that 2016 has seen the future–more artists have stopped looking to lobbyists to solve their problems.  Those lawsuits against Spotify, Rhapsody, Sirius XM, Pandora and even the U.S. Department of Justice?  All brought by individual creators with some courageous lawyers who are willing to take a chance–because of the statutory damages and attorneys fees provisions of the Copyright Act without which those creators would have to take yet more bullying from Mr. Shapiro and his members, Google or otherwise.

So hopefully Mr. Shapiro will understand my reaction to this statement in his comment:

[T]hankfully we won many battles as new forms of technology created huge new opportunities for our members…and for content creators.

If the last 15 years of Mr. Shapiro’s travails are what constitutes his “help” in fighting “battles”, if what we have to show for his “winning” these “battles” is the absolute skewering of songwriters, artists, authors, record producers, film makers, and everyone who works in these endeavors–not to mention the biggest income transfer in commercial history from creators to new boss tech companies as well as the commoditization of art and artists–I have one reaction that I think will be shared by “content creators” who read this blog.