According to Digital Music News and Torrentfreak, YouTube apparently has launched a charm offensive to show the creative community that they are serious about something other than screwing the creative community.  The latest evidence is a milquetoast communication (which hardly even arises to a demand letter, much less a cease and desist) to the stream ripping company TubeNinja.

Helienne Lindvall has an excellent 2013 post in The Guardian asking “YouTube and Spotify Ripping: Why Won’t They Act?”  (Answer: Because YouTube and Spotify get rich by ripping off the creative community and they know their users like getting free stuff so they encourage the behavior.)

Torrent Freak (naturally) has the actual communication from YouTube to TubeNinja and reaction from TubeNinja’s operator who goes by the war name “Nathan.”

According to YouTube the video downloader violates the terms of service (ToS) of both the site and the API. Among other things, YouTube’s ToS prohibits the downloading of any video that doesn’t have a download link listed on the site.

Later, Google’s video service adds that if the site owner continues to operate the service this “may result in legal consequences.” 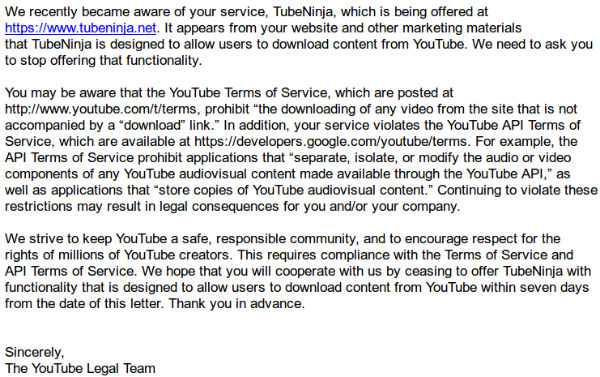 Despite the threatening language, TubeNinja owner Nathan doesn’t plan to take the functionality offline. He informed YouTube that his service doesn’t use YouTube’s API and says that it’s the responsibility of his users to ensure that they don’t violate the ToS of YouTube and TubeNinja.

“Our own ToS clearly states that the user is responsible for the legitimacy of the content they use our service for,” Nathan tells us.

TubeNinja doesn’t believe that YouTube has a very strong case and Nathan has asked the company for clarification. He also mentions that Google’s very own Chrome service lists many plugins that offer the exact same functionality.

“Nathan” is offering the most common reaction by infringers to threats of legal action by infringers:  I’m using the same loophole as Google uses, so until you sue Google you shouldn’t sue me.  This is not entirely crazy as Google is the biggest online thief and miscreant.  In fact, Google was nearly prosecuted by the Obama Administration (when you stop laughing we’ll continue).

If YouTube knows that there is no case, is this just a way to show content owners and copyright holders that they are fighting for their rights?  The news most certainly comes at a convenient time — a time that Google-owned YouTube has been under fire from all angles regarding its flawed Content ID system that simply doesn’t work effectively with a notoriously ineffective dispute process.

I guess only time will tell if these are empty threats or if YouTube will come full force with some serious consequences.

We think the answer is they are empty threats coming from YouTube, YouTube will not sue anybody over that being too preoccupied backstopping litigation against artists like Prince, there will be no consequences from YouTube and the one thing we are out of is time.